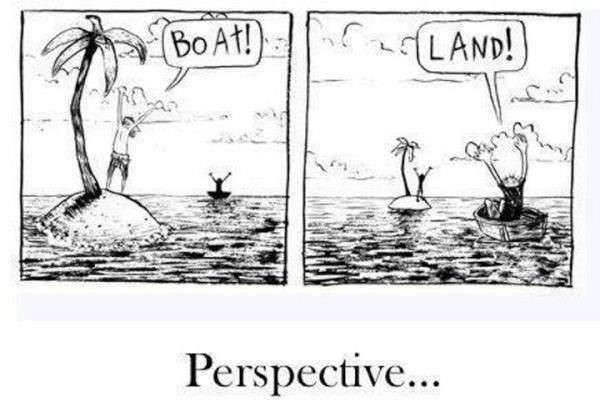 However, there are also other perspectives that we can talk about. What about the perspective of the reader. Most people probably look at this cartoon and think something similar to, “Ha. They are both still in trouble and they don’t know it yet.” But another reader may look at it and say, “Yes! They found another person to help them problem solve the situation.” A difference of perspectives.

Or what about the perspective of context. This cartoon (or some version of it) is quite old and seems to be one take on hope and disappointment. But our current context is that of experiencing a pandemic where many people have felt isolated on personal islands or boats. With this context, we could reread this comic as a statement on “returning” to human interaction. This cartoon carries a sense of hope and joy for the opportunity to renew relationships. A difference of perspectives.

We usually see a situation or a challenge from one singular perspective. And while our perspective isn’t necessarily “wrong”, it is most likely not the full picture. For example, I once ran a block stacking activity with a group of young leaders. It is much more difficult than it sounds, but at one point they needed to decide what block to stack next. The one that the group as a whole wanted to choose was objected to by one of the other students. This student, who was gifted at math and science, believed the physics of it all made it impossible for that block to work. The group consented to trying something else. At the end of the activity, as the group processed their success and struggles, they lamented not trying the original block. The student who was now extremely frustrated with their doubts, grabbed the block, walked up to the stack and placed it on top. With a look of shock on his face, not only did the block not fall off, it actually created a better setup for the next block. Him having a math and science perspective was not “wrong”, however, he was unable to step out of his perspective and see the challenge any other way. Sometimes, listening to other’s perspective can give us a fuller image of what needs to be done.

What is one perspective that you currently have that might need to grow in new ways?

Move from wrong-spotting to difference-spotting

This leads us into how we deal with others who come with differing perspectives. In their book, Thanks for the Feedback, Stone and Heen talk about how we interact when there is a difference of opinion. When there is a difference of perspectives, we often dive into wrong-spotting, which means that we are constantly looking for the wrong in the other person’s perspective as a way to end arguments. The problem is that there are many types of “wrongs”. For example, you can have:

What is one disagreement that you have with another person’s perspective that would benefit from shifting to noticing differences versus noticing “wrongs”?

Your attitude can flip your perspective

Finally, I would never be confused for an optimist, however, I have learned that taking a more positive approach to challenges increases the likelihood that you will be successful in overcoming them.

For example, almost without fail, when we run groups on our climbing walls, if the first person or two is successful, the rest of the group will be more successful on the wall as a whole. On the other hand, if the first couple people who try really struggle, the experience is usually a lot more difficult. If I see someone struggling, then my perspective is that the challenge is extremely hard if not impossible. But if I realize that others can do it, so can I, and I am more willing to not only take on challenges but push myself further than I originally considered.

Linguist and philosopher Noam Chosky said, “Optimism is a strategy for making a better future. Because unless you believe that the future can be better, you are unlikely to step up and take responsibility for making it so.” Our perspective of how we see people, challenges, life, is shaded by the attitude that we bring.

What is one attitude change that you can make today that may impact your perspective on a challenge you are facing?

We use cookies on our website to give you the most relevant experience by remembering your preferences and repeat visits. By clicking “Accept”, you consent to the use of the cookies.Cookie settingsACCEPT
Manage consent

This website uses cookies to improve your experience while you navigate through the website. Out of these, the cookies that are categorized as necessary are stored on your browser as they are essential for the working of basic functionalities of the website. We also use third-party cookies that help us analyze and understand how you use this website. These cookies will be stored in your browser only with your consent. You also have the option to opt-out of these cookies. But opting out of some of these cookies may affect your browsing experience.
Necessary Always Enabled
Necessary cookies are absolutely essential for the website to function properly. This category only includes cookies that ensures basic functionalities and security features of the website. These cookies do not store any personal information.
Non-necessary
Any cookies that may not be particularly necessary for the website to function and is used specifically to collect user personal data via analytics, ads, other embedded contents are termed as non-necessary cookies. It is mandatory to procure user consent prior to running these cookies on your website.
SAVE & ACCEPT